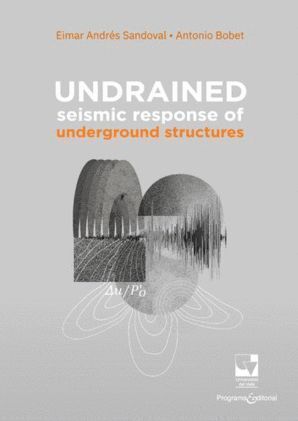 Underground structures must be able to support static overburden loads, as well as to accommodate additional deformations imposed by seismic motions. It seems well established that the most critical demand to the structure is caused by shear waves traveling perpendicular to the tunnel axis, which cause distortions of the cross section (ovaling for a circular tunnel, and racking for a rectangular tunnel) that result in axial forces (thrusts) and bending moments. While all this has been well-studied for structures placed in linear-elastic ground under drained loading conditions, there is little information regarding the behavior of buried structures placed in nonlinear ground, especially under undrained loading conditions, i.e., when excess pore pressures generate and accumulate during the earthquake. This book includes results of two-dimensional dynamic numerical analyses conducted to assess the seismic response of deep circular tunnels located far from the seismic source, under drained or undrained loading conditions. It is assumed that the liner remains elastic and that plane strain conditions apply. A new cyclic elastoplastic constitutive model is proposed to predict the nonlinear behavior and the excess pore pressures in the ground. The effect of the input frequency on the tunnel distortions of the cross section, and the effect of the relative stiffness between the liner and the ground on the distortions of the cross section, as well as, on the axial forces and bending moments of the liner are investigated. Excess pore pressures, shear stresses and plastic strains in the ground for different relative stiffness are also investigated.