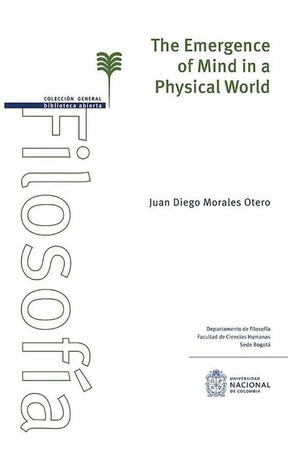 The emergence of mind in a Physical world (ebook)

"Contents
Acknowledgments
Introduction
Chapter 1. Causation: A Non-Reductive Approach
The Nature of Causal Entities
Causation and Laws of Nature
Counterfactual Theory of Causation
Causation and Locality
Probability and Intervention
Causal Context and the Possibility of Causation in the Special Sciences
Summary
Chapter 2. The Concept of the Physical and the Overcoming of the Supervenience Theory
What Physicalism Is
Physicalism as a Contingent Theory
What Is It To Be Physical?
Microphysical Supervenience as the Criterion for the Physical
The Empirical Failure of Microphysicalism
Consequences for Determining the Concept of the Physical
Finding a Solution to our Problem
Summary
Chapter 3. Emergentism as Type Macrophysicalism
The Idea of Ontological Emergence
Emergentism as Type Macrophysicalism
Reductive and Non-Reductive Microphysicalism
Property Dualism and Contingent Connections
Emergence and Metaphysical Dependence
Two Types of Ontological Emergence
Summary

The emergence of mind in a physical world presents an ontologically and methodologically well founded physicalist proposal that does not lose sight of the special particularity and alleged irreducibility of some of the most obvious phenomena of our existence, such as the human mind. The author provides a compelling argument against the most widely accepted interpretation of physicalism, microphysicalism, highlighting its deep empirical and conceptual problems, as well as an insightful response to the reiterated critiques leveled by some reductionist philosophers, especially Jaegwon Kim, at the non-reductive physicalist explanation of the causal relevance of mental and higher level properties. Morales argues in favor of emergentism as a non-reductive physicalist proposal that explains the causal reality of higher-level properties as metaphysically bases. This novel interpretation will be of great interest to scholars working in the field of philosophy of mind.